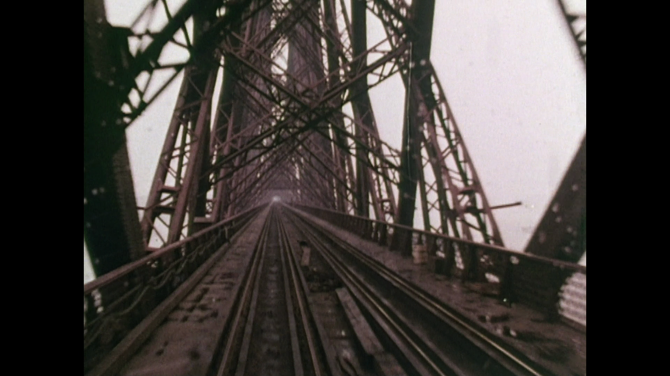 This year’s Film London Jarman Award tour will see the best in contemporary artists’ filmmaking taken to venues across the UK from this autumn, coming to Towner Art Gallery from 5-8 November 2015.

Featuring work from the six artists shortlisted for this year’s Jarman Award, the tour will offer art and film lovers the chance to explore a diverse range of groundbreaking work, from Andrea Luka Zimmerman’s extraordinary documentary about the residents of a condemned Hackney housing estate to Bedwyr Williams’ futuristic storytelling.

Shortlisted artist Alia Syed will give a talk at Towner on Saturday 7 November at 2pm. Syed will discuss her film Points of Departure (2014), which uses archive footage of a collective past and combines it with personal recollections to fracture the normative culturally dominant view of Glasgow’s cityscapes and re-insert a Scottish Asian presence.

For the first time the tour spans England, Scotland, Wales and Northern Ireland, with screenings, exhibitions and artist talks at 12 major arts venues from Manchester andMargate to Glasgow, Belfast and Cardiff. The tour will culminate in a special weekend at Whitechapel Gallery on 21-22 November which will feature special installations, events and one-off performances.

To coincide with this year’s tour, a special exhibition of work of Ursula Mayer, the 2014 Jarman Award winner, is presented at The Gallery (8 October – 22 November), Tyneside Cinema’s space dedicated to artists’ moving image work. The exhibition is curated by Tyneside’s Elisabetta Fabrizi, and FLAMIN (Film London Artists’ Moving Image Network).

The winner of the Award and £10,000 prize will be announced on 30 November 2015at a special ceremony at the Whitechapel Gallery. Channel 4 will also support the award by commissioning a number of the artists to produce new films for their acclaimed Random Acts arts strand.